Sorry I haven't been posting, have been adjusting to a new job and dealing with personal things. Now I get to show you one of the things I've been working on under the hood: I've made a website from scratch. It provides many different functionalities that Blogger cannot (like a navbar) and is currently missing some things that Blogger provides (like a Blogroll [I'm going to be working on an entire web page that will function like a Blogroll and showcase other people's blogs.]) Here it is, in its current version. I will continue to tinker with it until the end of time, most likely. https://www.tarsostheorem.com/ If you see any weird visual bugs, or have suggestions for improvement, send me a PM or an email. Contact info is under the About page!
Posted by Saker Tarsos at 2:49 PM 5 comments:

Beneath the Canals Generators: Phase 1


Here are the unstyled forms of the generators for the original Beneath the Canals zini.
Some of these generators are interdependent, for instance, if you set a time of day using the "determine time" generator or set an area using the "generate a room" generator, the probabilities of the encounter table will shift accordingly to suit that time and/or setting.
Additionally, the item generator allows you to "save" the item with a name you have given it, and it will then display a list of the items you saved. It's not a true save though: if you refresh the page, the list will reset. This is why I've called this post "phase 1". We plan on developing further on this functionality as the project continues.

As a practice exercise, I translated the Tracery code from the Twisted Histories bot into JavaScript so those of you who aren't on Twitter can experience the madness!
Posted by Saker Tarsos at 8:51 PM No comments:

This is a small part of a project in the works: a small DM guide featuring shortcuts and helpful tables for running sci-fi RPGs (featuring/integrating some of the playing-card mechanics in previous posts). The goal is to cut down on prep time, if not eliminate it altogether, using smart procedural generation.
I'm quite proud of this table in particular, and, well, I want people to get use out of it as early as possible.

Here is an image of the original version, which I find better captures the darkness of space. 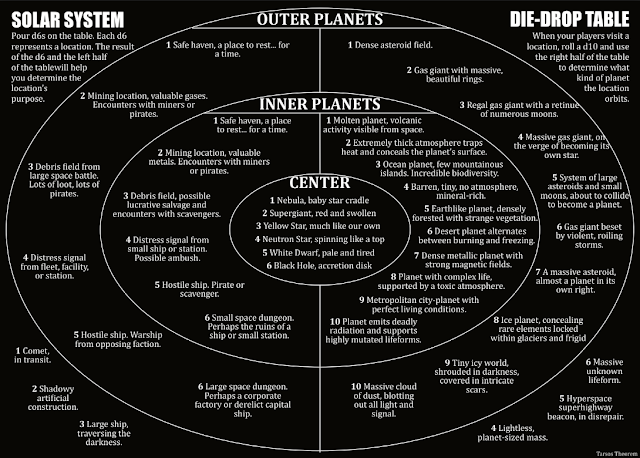 And here is an image of the printer-friendly version, so as not to burn up your ink reserves. 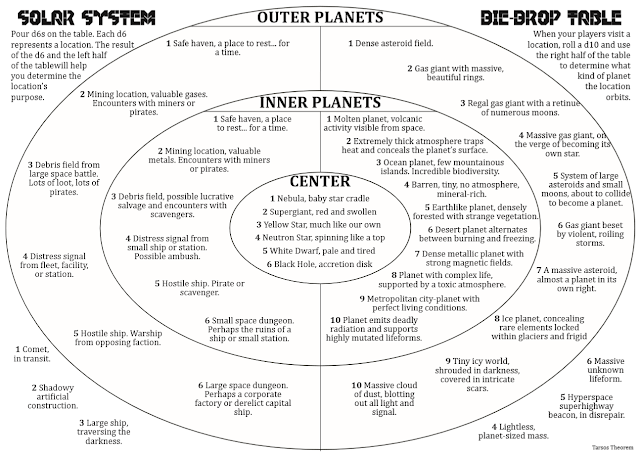 And here is the link to the printable PDF!
The tables should print well onto a regular sheet of paper, landscape format.
As usual, I'm looking for feedback of all sorts on the design! (If at some point I decide to make a patreon, this is an example of something that would be included in some sort of monthly content pack.)

Lots of exciting news these past few days: I got announced as a stretch goal for the UVG Kickstarter, where I will be making a digital DM screen with some expandable functionalities (more on this later as things progress!) With 6 days to go, we are about $5,500 away! Consider this another reason to add to the endless pile of reasons to back the astounding amalgamation of awesomeness that is UVG. 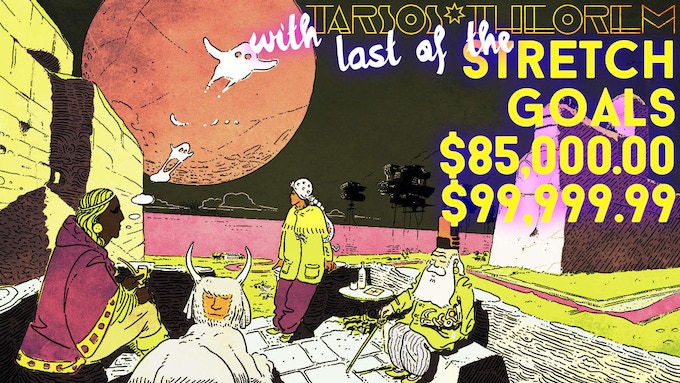 Second of all, I have a new job starting Tuesday, which is pretty exciting because it is my first tech-adjacent job, and it will make some use of the coding skills I've developed while in the OSR! (It also pays significantly more than my previous job and so that means ART BUDGET MONEY for projects in the works!)

Third of all, my windshield got smashed and needs replacing, so that ART BUDGET MONEY will have to go to that first :C
Tis a minor setback, though.

Fourth, there is a contract in the works for a writing commission! I'm pretty excited because it's in an extremely gonzo setting! More on this soon.

It's called Twisted Histories! If you're on Twitter, tweet @twisteryhistory to receive a tale of a bizarre historical event!
It uses an upgraded version of my Histories of the Blasted Lands that was made in Tracery, a script for generative grammars that allows things like names to be generated in far higher detail and complexity.

I've got a few more ideas for bots in the works...

EDIT: this little bot is honored to be praised by TTRPG's most prolific possum!
Posted by Saker Tarsos at 4:45 PM 2 comments:


EDIT: Beneath the Canals has wrapped up at $6,208 and 602 backers! Thank you to everyone who made this incredible project happen!

Chances are if you follow this blog, you've already heard of Beneath the Canals. If not, then this might be worth a read.

It started as a humble kickstarter with a goal of $200, and has since grown vast and wild with community interest and support. At the time of writing, it's at $4,971 and counting. It's also, from a data standpoint, a fascinating experiment that has completely defied kicktraq's projections.

It's formatted as what's known as a "zini": both sides of a two-page spread, jam packed with as much content and information as possible given the spatial limitations. I'm excited that we are going to see the same blend of usability and information density that we saw in Dead Planet. (I've seen the initial zini and it is damn good.)

This looks to be a combination of excellent content creators and intriguing concepts. For instance, we have a living one-page dungeon by Zedeck Siew (hype!!), a zini of corpses, cadavers, and random encounters made by a real-life possum (who has overcome millions of years of evolution in order to develop opposable thumbs and deliver you quality OSR content), a zini of lost saints, forbidden reliquaries, and ancient religions by Fiona Geist (hyyype!!), and a zini about weird and disgusting fungi by Donn Stroud (of Dead Planet fame). We have a zini by Mabel Harper about a criminal underground of guerilla artists, a zini by Skylar Wall about ancient customs and artifacts, a Swordsfall/Pentola crossover by Brandon Dixon, and a zini about the illicit wares and underground markets by the team that worked on Best Left Buried. We have art by Sinereous, Abigail Lalonde, Michelle Smallwood, Matthew Cartwright, and maps by Foot of the Mountain. Additionally, we've brought on Cassidy Webb, of Form and Void, to do editing!

And... just as it so happens... I've been hired to make digital webtools for each and every table and zini. C: So I suppose there is that to look forward to as well.

It's got about two and a half days left to go, so now's the time to jump in and get yourself a copy!


Posted by Saker Tarsos at 4:23 PM No comments: