It's called Twisted Histories! If you're on Twitter, tweet @twisteryhistory to receive a tale of a bizarre historical event!
It uses an upgraded version of my Histories of the Blasted Lands that was made in Tracery, a script for generative grammars that allows things like names to be generated in far higher detail and complexity.

I've got a few more ideas for bots in the works...

EDIT: this little bot is honored to be praised by TTRPG's most prolific possum!
Posted by Saker Tarsos at 4:45 PM 2 comments:


EDIT: Beneath the Canals has wrapped up at $6,208 and 602 backers! Thank you to everyone who made this incredible project happen!

Chances are if you follow this blog, you've already heard of Beneath the Canals. If not, then this might be worth a read.

It started as a humble kickstarter with a goal of $200, and has since grown vast and wild with community interest and support. At the time of writing, it's at $4,971 and counting. It's also, from a data standpoint, a fascinating experiment that has completely defied kicktraq's projections.

It's formatted as what's known as a "zini": both sides of a two-page spread, jam packed with as much content and information as possible given the spatial limitations. I'm excited that we are going to see the same blend of usability and information density that we saw in Dead Planet. (I've seen the initial zini and it is damn good.)

This looks to be a combination of excellent content creators and intriguing concepts. For instance, we have a living one-page dungeon by Zedeck Siew (hype!!), a zini of corpses, cadavers, and random encounters made by a real-life possum (who has overcome millions of years of evolution in order to develop opposable thumbs and deliver you quality OSR content), a zini of lost saints, forbidden reliquaries, and ancient religions by Fiona Geist (hyyype!!), and a zini about weird and disgusting fungi by Donn Stroud (of Dead Planet fame). We have a zini by Mabel Harper about a criminal underground of guerilla artists, a zini by Skylar Wall about ancient customs and artifacts, a Swordsfall/Pentola crossover by Brandon Dixon, and a zini about the illicit wares and underground markets by the team that worked on Best Left Buried. We have art by Sinereous, Abigail Lalonde, Michelle Smallwood, Matthew Cartwright, and maps by Foot of the Mountain. Additionally, we've brought on Cassidy Webb, of Form and Void, to do editing!

And... just as it so happens... I've been hired to make digital webtools for each and every table and zini. C: So I suppose there is that to look forward to as well.

It's got about two and a half days left to go, so now's the time to jump in and get yourself a copy!


Posted by Saker Tarsos at 4:23 PM No comments:

In the last post, we covered basic rules for mapping a city using playing cards.

Now let's look at how we can apply this system to constructing ships and stations in sci-fi games. This can apply to stations-as-dungeons that are drifting through the dark reaches of space for players to explore, or it might apply to the ships players themselves commandeer or construct. 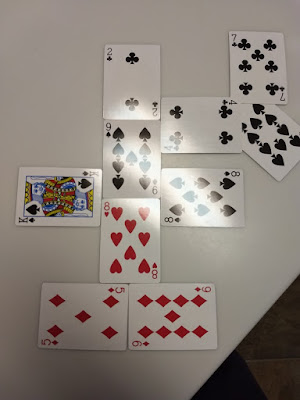 Crew Quarters: Eight of Hearts (A spacious crew area that has to pull double duty as specimen storage.)


The key to this system is interpretation. What looks like a pile of cards could become a ship if looked at from a new angle. Your ships will end up a little strange, and that's good: idiosyncrasy leads to interest. Every imperfection is a story.


WHAT DO YOUR SUITS SIGNIFY?
-Function: Diamonds are engines, Hearts are luxury/storage, Clubs are weapons, Spades are tech/science. (or any other interpretation, point is to have all the major functions covered.


WHAT DO YOUR NUMBERS SIGNIFY?
-The highest value face-card of a ship is its cockpit.
-Effectiveness: For Engines, this might affect initiative and maneuvers. For Weapons, this affects damage. For Tech modules, this gives them more interesting and potent capabilities. For Storage, affects space.
-Hull armor: When a weapon attacks this section, the damage is the difference between the weapon's number and the target card's number. If a card takes damage, subtract it from the card's number and then place a new card over it that reflects the new number (to track damage). -Oxygen levels, Light levels, or Radiation levels: (best for space dungeons). 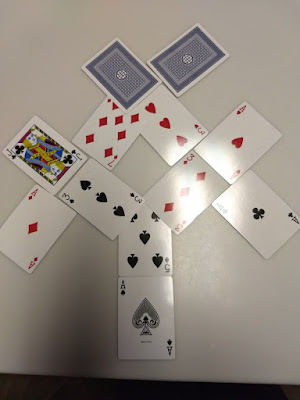 A large, abandoned station drifting through space. Various docking ports still remain. The crew of the Osprey (not shown) decides to dock at the Ace of Spades, and search the station to try and find out why it was abandoned.

The atmospheric regulators in Docking Bay XV-07 have been broken for quite a while, so we'll have the numbers represent Oxygen levels, which have been leaking around the edges of the station.

Within the station they discover a cargo room (Seven of Diamonds), and a military barracks full of energy weapons (Jack of Clubs), but their true goal, information as to the station's downfall, eludes them. They continue deeper down the silent, abandoned hallways (face-down cards)... 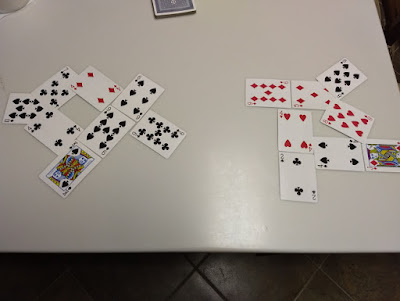 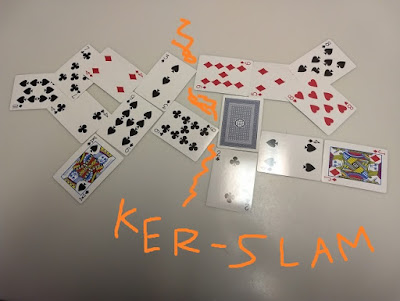 The pirate vessel rams the luxury cruiser. There are two points of contact. The first is the 9 of Clubs (laser cannon) vs. the 4 of hearts (viewport). The difference between the two cards gets dealt to the weaker one: the viewport takes 5 damage and gets completely shattered. The second point of contact is a highly-armored storage vault (9 of diamonds) vs. a forward scanner (6 of Spades): the forward scanner takes 3 damage and its effectiveness is decreased. 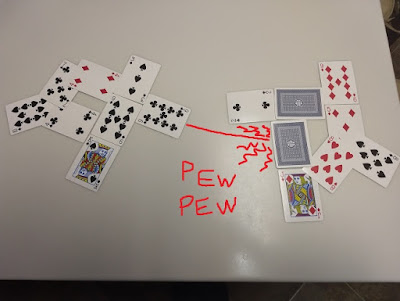 The luxury cruiser then gets to act. It moves away from the pirate vessel before any pirates could board, faces the direction of its jump coordinates, and begins charging its lightspeed drive.
The two ships roll initiative for the next round. The pirate ship wins again. It fires its forward laser cannon (9 of Clubs) at the luxury cruiser's own forward scanner (4 of Spades), dealing 5 damage and destroying it. 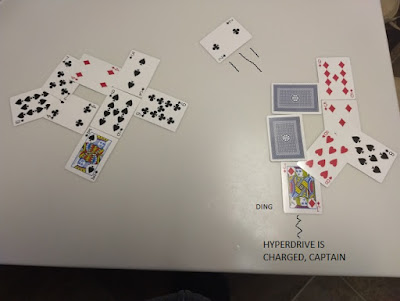 The luxury cruiser's small laser turret (2 of clubs) is no longer attached to the rest of the ship! It sails off into the inky darkness of space. The luxury vessel's lightspeed drive is done charging, and it jumps away, badly damaged and leaking oxygen. The pirate vessel could scavenge the debris left behind by the destroyed modules, or it could try to give chase with its high-tech scanning and detection equipment. 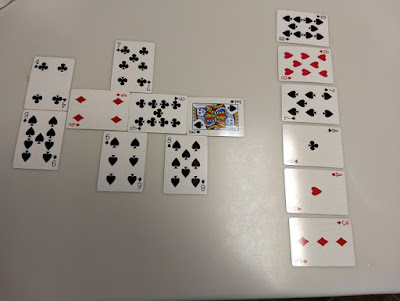 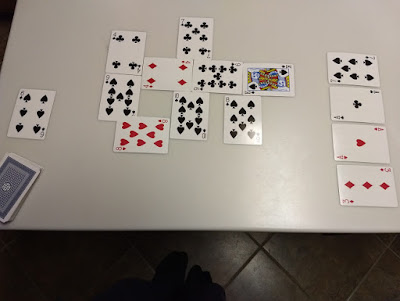 The crew of the Winter Orphanim Omega, a mercenary vessel, has docked in a shipyard for repairs and upgrades after completing a lucrative bounty. In a line on the right are the upgrades the shipyard has for sale, which were randomly drawn from the deck.

They decide to upgrade their forward scanner (6 of Spades) to a long-range system scanner (10 of Spades). They also purchase a luxury storage unit, something they've realized they badly needed after not having the storage space to pick up the valuable debris their bounty target jettisoned into space. They were also looking for an upgrade to their engines (4 of Diamonds), but unfortunately, the shipyard didn't offer any.

This post ended up being a lot longer and more extensive than I had originally thought. Thinking about expanding this into a full system, and then putting that system up on drivethru, with a bunch of tables and infographics. Is that something you might be interested in?
Posted by Saker Tarsos at 3:34 PM 9 comments: