Much like using playing cards as maps, and crafting using concepts this system is made in response to a problem. In this case the problem was: statblocks are annoying, and they represent a lot of work for little return. Both the time the DM spends fiddling with AC and Attack Bonuses, and the module real-estate spent on statblocks, could be put to better use.

This system is about grabbing a handful of d6s, rolling them, separating them into horizontal rows, and having each of those rows represent a monster. A row of d6s tells us everything we need to know to run a monster, we just have to find uses for all the pieces of information the d6s provide to us.

The key to making an efficient system means recognizing when a resource can serve multiple functions. In this case, the d6s are going to serve as both a measure of enemy health (hit dice come to mind) and as an "attack pattern".
In order to do this, each d6 is going to represent a part of that enemy (for example, a claw, head, or tail) with a health stat and an attack/damage stat. You can read a row of attack/damage stats as an "attack pattern".
(NOTE: This current methodology of reading dice applies best to Into the Odd, as it doesn't have to factor in chance-to-hit or attack rolls. This is what I'm using in my sci-fi Into the Odd-ish game.) 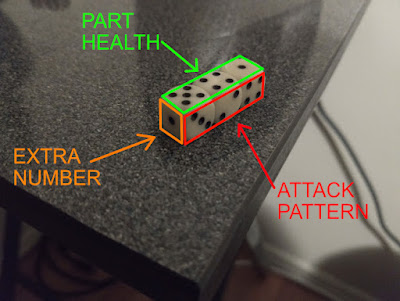 DAMAGE AND PART HEALTH: When a player deals damage to the monster, compare the damage to the Part Health. If the damage is equal to or higher than the Part Health of one or more Parts, that part has been destroyed: remove the die with the highest Part Health that is lower than the damage. If no parts were destroyed, subtract the damage from the die that has the highest Part Health, then turn the die so its Part Health matches the new result. This'll change the attack pattern, and that's good. Enemies tend to change their behavior when they get hurt.
(Optional Rule) Flinching: if a player ends up destroying the part that the enemy's about to use to attack before the enemy's turn, the enemy loses their turn. Adds a dark-souls-like poise feeling.

INITIATIVE: If you're rolling up multiple enemies, just use the top-down order of their stat rows as their initiative.

EXTRA NUMBER: Open real estate. Use this how you wish, or don't use it at all. When I tested my zombie game, I use this as the "headshot number": if a player rolls exactly this much damage against a zombie, it dies instantly. In a different test, this number instead represents enemy soldiers' primary weapons, consulting a d6 table. You could also create a rudimentary d6 monster AI table and use the "extra number" to determine which PC it attacks, etc.

DOUBLES: Special attacks, abilities, statuses, etc. This one is optional. I like to have a d6 table on hand so I can make enemies with doubles into something special. This kobold has two 1s in a row? It's a shaman! This zombie has two 4s in a row? It has a mutated bile-spit attack! This supersoldier has two 2s? It's a demolitions specialist! And so forth. This can be used as an easy way to distinguish an enemy from the pack.

Crafting systems are untenable in most games because recipes and ingredients are specific. In order to build a Thermal Engine, you need a Combustion Core and an Engine Block. This requires you to remember/record the specifics of the recipe and locks the players into seeking these very specific materials. This is usually fine if you're dealing with a single crafting recipe, like if it was a quest goal, but an entire crafting system built around this level of specificity would be difficult to manage.

Here we've broken the individual ingredients down into intrinsic, thematic concepts. This allows us to turn a piece of information that would have to be formulaically memorized/recorded into a piece of information that is simple enough to intuitively make sense. It also gives the players a lot more freedom to craft what they need using the things they find. Now players could use such wild and wacky things as a canister of lava, a fire elemental heart, or a tiny baby sun instead of a combustion core to fulfill the [HEAT] requirement.

This system makes the logic of salvaging much easier to handle as well. Instead of salvaging something down to specific parts, break things down into concepts. Concepts "stack" much better in the inventory (and the brain!) than specific materials, and so this avoids the tedium of recording and tracking large amounts of different crafting materials.
-A Thermal Engine would salvage into [HEAT + MACHINE].

Craft a conceptual crafting system that fits your game or world. Boil your game world down into a collection of concepts that fit thematically. Now, any item your players could want to craft or salvage can be made up of one or more of those concepts.

-For example, a scifi game about building machinery and robots might boil down to:
[ENERGY, COMBUSTION, FORCE, AI, CHASSIS, LOCOMOTION, WEAPON]
and a recipe for a Heat Beam might be [ENERGY+COMBUSTION+WEAPON].

-A game about frankenstein-esque biomancy might boil down to:
[BLOOD, HEART, BRAIN, ARM, EYE, LEG]
and a recipe for a Mobile Cranial ObServitor might be [BRAIN+EYE+LEG].

-A game about building arcane spells might boil down to:
[SUN, MOON, STAR, EYE, BLOOD, HOLY, CURSED]
and a recipe for the ritual of Beckoning Blessed Celestial Intelligences might be [STAR+BRAIN+HOLY].


This will likely be part 1 of a series expanding on this base system.