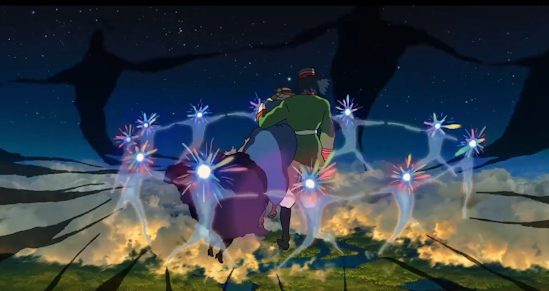 Tiny, star-headed beings with wispy bodies of darkness, possessed of a mischievous nature and indefatigable curiosity. Their forms are small but their shadows stride the world like colossi. They speak in theremin-wobbles like tiny birds, and laugh like children, yet the youngest of them has far outlived this world. It goes without saying that you should not look them directly in the eye. In fact, any contact with them comes with a heavy price, as their poisonous light corrupts your cells and sears your mind.

Rumors of the Starfolk

1. In an ancient age, the first giant bent his great bow towards the heavens and began to strike down the stars one by one. Those that fell to earth could never return to the heavens, and so spent the long ages tormenting the first giant for his crimes.

2. The live as long as stars, and instead of dying, their heads collapse into black holes.

3. Ancient civilizations would trap them in cold-iron sarcophagi and harness their strange energies to power nightmarish machines.

4. They want only to help, but human forms and ways are so alien to them that their attempts always end in tragedy and ruin. (This does not seem to deter them.)

5. They will always answer when asked upon, if you know how. The question, however, is when.

6. When Starfolk fall in love, they enter orbit with each other, forming binary, or perhaps even trinary, Starfolk.

7. When a civilization reaches a certain level of technology, the Starfolk descend to greet them.

8. They fear and abhor the moon, an ancient emnity caused by a long-lost cosmic conflict during the formation of the world.

9. The size of their shadow determines their emotional state. If a Starfolk's shadow begins to swallow up the horizon, run. (It's probably too late anyways.)

Signs of the Starfolk

2. A new constellation appears in the sky for a prime number of days, then disappears.

3. A normally star-filled part of the sky empties into a starless void for a prime number of days.

4. The inhabitants of a village suffer from severe sunburns, all at once.

5. Massive designs of incredible complexity are found scorched into the landscape.

6. A civilization or population notices an increase in cases of a mutating, wasting illness.

8. Radios and other devices operating on electromagnetic wavelengths periodically fade to static and emit only high-pitched voices chanting in unknown tongues.

What do the star-headed want?

1. To free one of their kin who is imprisoned in a sarcophagus deep underground, powering a nightmare-factory of the ancient times.

2. A folk song from the region translated into high-frequency electromagnetic waves.

3. To repair an ancient observatory in order to intently study a far-off galaxy. (Are they surveying for threats, or just checking up on family?)

4. The person who called them died of star-sickness. Now they want to "help" the next person they saw... you.

What will they give in return?

Gifts from the far heavens always come with a price.

1. An epic tale of their stellar culture, seared into your brain... (20,000 cash to storytellers/naturalists if translated successfully, -1 Thought/Int permanently)

2. Spell: Solar Crown - You will bear on your brow the echoes of interstellar royalty. Your words will crackle with fusion energy and your glare will carry the silent weight of light-years. They cannot bear to look at you, they will follow your every word as the commandments of the stars... for a time. Once it ends, you will be ever-eclipsed, for the astral priests spoke true: Heaven's knowledge burns. Your skull will be forever scarred, and a part of your brain will have boiled: a bright white star sitting amidst your thoughts, ever hungry. You become monarch of the universe until your brain fries. Everything you try to do will go as well as it can possibly go, but every time this happens, test your Aura (or Wis). If you fail, your Aura (or Wis) permanently decreases by 1. The mantle of monarch is a final, grave responsibility: there is no way to cast off this mantle before the thermokinetic death of your soul.

3. You become star-crossed. You will meet your destined love on the crossroads of fate. (Player in question can design a follower of their devising of equal level to their character. Both their character and the follower have advantage to tests made to aid or protect the other.) They are fated to meet a tragic end worthy of song.

4. You receive knowledge of an advanced technology or invention that the ruling government or inquisition will find absolutely heretical and will stop at nothing to eliminate at all costs.

An update to the Random Tables Bot 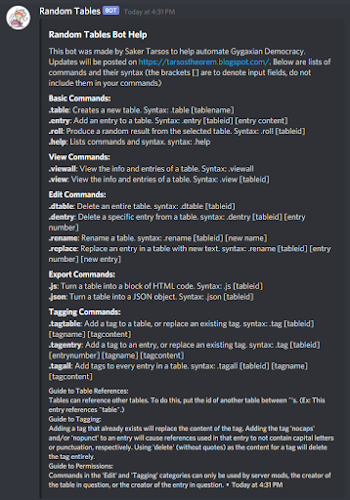 Tags allow you to add properties to entries and table. This could be used to, say, add stats to an entry, identify tables for easy referencing (see ".viewall by" under bonus features below).

-A tag is made up of two parts: the tag name, and the tag content.

-The bot doesn't look at tag content, even for Tags of Power (see below), the bot only checks if the tag name is present. You can leave the tag content field blank if you so choose, it is not required to process the command.

-If a table/entry already has a tag, and you apply a tag with the same name, the tag's content will be replaced with the new content. Additionally, if you replace a tag using this method but have the content = "delete", the tag will be removed.

The following tags will change how the bot functions regarding the tagged entry.

nocaps: if an entry contains this tag, any other table entries this table references will not contain capitalizations.

nopunct: if an entry contains this tag, any other table entries this table references will not contain punctuation.

Following the .viewall command with "by [tagname]" will bring up a list of all tables that contain this specific tag. .syntax ".viewall by [tagname]"

Email ThisBlogThis!Share to TwitterShare to FacebookShare to Pinterest
Labels: bots

My first foray into the world of Discord bots is now ready to deploy! It's designed to help with crowdsourcing random tables.

-Tables are able to reference other tables, using them to build their results.

-Simple tables (those without references) can be exported as HTML snippets (can be dropped into web pages) or JSON objects (to feed advanced data projects).

Most of the bugs and errors have been tested out, and I'm now feeling good about letting it spread to new servers. If you would like an invite to your server, send a DM to Saker Tarsos#7223! Also, if you find a bug, please let me know and you will receive my heartfelt thanks!

Start Guide (quotes are used to signify commands, and brackets are to signify input content, do not include the brackets or quotes):

-View the table in the table list by typing in ".viewall"

-Add an entry to the table by typing in ".entry [tablename] [entry content]" (ex: ".entry food A delicious casserole.")

-View the entries of a table by typing in ".view [tablename]"

-Once you have multiple entries in a table, roll a random result from the table by typing in ".roll [tablename]"

-Create a table (we'll use the "food" table from the above examples) and populate it with entries.

-Create a second table (we'll call it "events"), and add an entry that references the name of the first table between "^"s. (ex: ".entry events There was a great feast that featured ^food^.")

-Roll a random result from the second table, and it will pull a result from the first table and incorporate it into its own result. (result: "There was a great feast that featured a delicious casserole.")

-Note: the bot will automatically format referenced content to remove capitalizations and punctuation. This is why the above result was not "There was a great feast that featured A delicious casserole.."