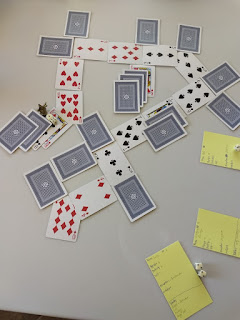 Playing cards can be a random generator and a mapping system at the same time.

They contain multiple codified information systems stacked within the same image. You can change the probabilities on the fly by adding or subtracting certain cards from the deck (you can even use this to have player decisions alter future probabilities). One of its biggest strengths is its flexibility. You can codify the layers of information however you want.


THE RULES:
-Place a card face-up on the table: this is the starting location. Place cards face-down attached to the starting card according to the "how do your streets split?" rules (a few paragraphs down).
When your players move to a new street:
1. turn that card face up
2. place face-down cards according to street splitting rules
3. describe the street to the players (using "what do your suits/numbers signify?")

Questions to create the personality of your city:


WHAT DO YOUR NUMBERS SIGNIFY?
-Level of Activity: i.e. how many people are in the location, or, how many things are happening right now?

-Instability/Danger: this could correspond to the lethality of encounters, or the likelihood of dangerous encounters, within that space. You could roll a d12 and if it rolls under the card’s number, it’s a random encounter. Or, if you are using a system with monster/encounter levels, you can use the card’s number as the level.

-Wealth: if you want a more nuanced measure of wealth than just equating card suits with upper class and lower class biomes.

-Elevation: in a city where elevation is an important factor.

-A Faction(suit)'s political or social influence.

WHAT DO YOUR FACE CARDS REPRESENT?
Face cards could represent things your PCs want, or would find interesting.

Can use face cards as citycrawling landmarks: if the PCs learn the location of a face card, place it on the table a ways off from where they currently are, then make them citycrawl towards it.


ADDITIONAL RULES
-If you want your city to separate into “neighborhoods”, or faction “turfs”, add a rule where whenever you draw a new suit, you have to filter the next d4 draws so they are the same suit.

-You can do the same thing with numbers, and filter draws so that new streets are either one number above or below the street it split from, in order to simulate more gradual changes.

-We can also add gimmicks to simulate certain peculiarities. For instance, if we wanted to express a city riddled with secret passageways, we could add a gimmick where players can travel between unconnected cards of the same Number, but roll on a scary secret passageway encounter table or something.

PERMANENCE
-For a short-term visit to the city, you could "save" the city setup by taking a picture on your phone, then reassembling the cards for the next session.
-For a long-term urban campaign, you could do the above solution, and have it so that whenever the PCs map out a full district, it gets drawn on an actual city map. (You could have each district be a full deck of cards)

EXAMPLE CITIES
-A city consumed by a turf-war between rival gangs. Suits represent factions, and Numbers represent the strength of a faction’s influence. Filter suits to create neighborhoods. Then the borders between neighborhoods become the amount of political or social pressure a faction is exerting upon its neighbor: a border in which both Numbers are low means very little pressure or conflict, a border where both Numbers are high indicates a full on turf war between factions, and a border where one Number is high and the other low indicates that a faction is about to annex new territory.

-A city with lots of verticality where elevation matters. Suits represent different factions, and Numbers represent elevation, and wealth is also tied to elevation. The city is very dense, with many intersections so streets split according to a die roll. Gimmick: in addition to traversing the streets as normal, players may use gliders or zip-lines to transgress the card boundaries and glide from any street to a nearby street (within, say, 6 inches) that is of a lower elevation. 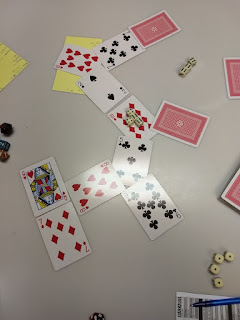 In the above image (a playtest of my upcoming module), Xyn the protester and "Terrifying Randy" the vagrant (both played by Goat Wizard) begin on a wealthy avenue (10 of hearts). They venture through the city, and eventually rally a group of 18 anarchists (they encountered the anarchists in the 9 of clubs, the entire group is represented by the d6s). The image shows them trying to protest at a heavily armed and dangerous government barricade (10 of diamonds) before being turned back at gunpoint. They would later go on to occupy the Cathedral of the Cleansing Flame (queen of hearts) against an oncoming squad of riot police (7 of diamonds) in order to protest the government's mistreatment of sick citizens.
Setup used:
-Diamonds are government.
-Hearts are citizens.
-Clubs are protesters/civil unrest.
-Spades are infected.
-Card number represents severity/concentration.


BONUS: VERTICALITY
By stacking cards, you can represent a 3-d location on a 2-d tabletop. By stacking them diagonally, you can keep the suit and value visible while also providing a visual representation for the virtual vertical space that the stack occupies.